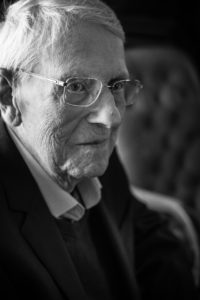 Jules D’Hoore was born in Sluis (the Netherlands) on 7th May 1917, while his family was on exile as Belgian refugees during WWI.  After the war his family returned to Bruges where he followed the Greek-Latin option at St. Lodewijkscollege. During the WWII Jules’s university studies were disturbed by the war mobilization and he was war prisoner for a short period. Eventually he obtained his diploma of Engineering in Chemistry and Agricultural Industries from the State Higher Agronomic Institute in Ghent 1943. He stayed on as assistant at the Faculty of Sciences of the State University of Ghent, in the Laboratory of Analytical Chemistry (Prof. J. Gillis).

In 1946, Jules undertook his first mission to Congo as assistant researcher in the Department of Agrology, INEAC, Yangambi. While serving as visiting Researcher of Wisconsin, USA in 1949 he made visits to soil laboratories of the Universities of Ames, Cornell, and Pennsylvania  State and to the US Soil Conservation Service, Washington, DC. In 1951 Jules participated to an OECE mission (3 months) in western Africa in company of L.T. Alexander (USA), R. Maignien and G. Aubert (France), and C. Bloomfield (UK): field study of laterisation phenomena.

In 1953 he was detached to the Commission for Technical Cooperation in Africa (CCTA) as Director of the Service Pédologique Africain / Interafrican Pedological Service (SPI). In 1954 Jules was involved in the preparation of the “II° Conférence Interafricaine des Sols” (2nd Inter-African Soil Conference) and the International Soil Congress of Leopoldville, Congo. In this period he started assembling the soil map of Africa at 1/5,000,000 scale. For that purpose he made several visits to the major soil centers of Africa and Madagascar along with field work during numerous soil correlation meetings with regional soil scientists active in Africa.

During his fourth mission to Congo in 1956 he designed a first approximation of the Soil Resources Map of Africa and of its provisional legend. This map was verified during numerous regional workshops all over Africa. The third approximation of the Soil Resources Map of African was presented in 1960 during the 7th International Soil Congress at Madison, USA. At that time, the baseline documentation of that map, stored in Yangambi, becomes inaccessible, because of the evacuation of this research center. Jules had no other option than reconstituting this documentation by personal mailing to correspondents. He was temporary hosted by the “Service Pédologique Interafricain” (Inter African Soil Service) in Ghent, thanks to the hospitality of Professor De Leenheer and Professor Tavernier. In 1962 he is assigned as member of the “Advisory Committee Project World Soil Map”, FAO-Unesco.

In 1962 Jules joins the Centre for Tropical Soil Studies at Katholieke Universiteit Leuven. He drafts the Fifth Approximation of the Soil Resources Map of Africa which is eventually published in 1963 in French and in English along with its legend and an elaborate explanatory text.

In 1970 Jules makes a study visit to the Goddard Space Flight Center, Maryland, USA and studies remote sensing techniques and their usability for soil observation and broad scale soil  mapping. As of then he is prominently present in international fora on remote sensing (ESRO) as delegate from Belgium, among many others the new department of Remote Sensing of the Joint Research Centre, EURATOM, Ispra, Italy. He also was the inspirator of a state funded programme on remote sensing studies in Belgium. In 1976 he becomes the permanent Belgian member at the Remote Sensing Advisory Group at ESA (European Space Agency), charged by the Science Policy Office, Brussels.

Also in that year he is elected President  of the Soil Science Society of Belgium. As of 1977 Jules is  member of the “Klasse voor Natuur- en Geneeskundige Wetenschappen van de Koninklijke  Academie voor Overzeese Wetenschappen” (Class for Nature and Medical  Sciences of the Royal Academy of Overseas Sciences). He also gets actively involved in the first versions of Belgium-supported Inter-University Development Cooperation with missions to Zambia, Malaysia, Thailand and Congo. In 1983 Jules is  Entitled Member of the Class for Nature and Medical Sciences, Royal  Academy of Overseas Sciences. During his professional career, Jules D’Hoore was honored several times with awards such as the price “Wetteren”, Royal Academy of Sciences, Belgium (together with J. Fripiat), the “Medal Order of the Lion” and “Great Officer in the Leopold Order”.

With his lectures edging at the frontline of scientific development, Jules D’Hoore was an excellent professor, giving his students a world view on soil genesis and soil geography, and a strong feel for interdisciplinarity, as he had worked with agronomists, geologists, ecologists and others during his career. With his Soil Resources Map of Africa he made school internationally and this valuable document still remains till today an important reference milestone from where new tropical natural resources work is starting. Jules D’Hoore’s soil map of Africa was recently the center-piece of the ‘Africa in Profile exhibition’ which was organized at KU Leuven to mark the International year of the Soil in 2016. For the occasion, Jules kindly allowed recording an elaborate interview in which he reflects on his Soil Resources Map of Africa.

Jules D’Hoore had a somewhat rigid appearance, but in fact he was a sensitive person, with discrete empathy for those in need. He was famous for his erudition, fluency in languages and his interest in art, culture and history, which he liked to share. Jules had a sarcastic sense of humor and a capacity for making verbal caricatures. His speech at the day of celebrating the end of his career will be remembered for two rather ‘Julian’ expressions: he compared the soil to a ‘palimpsest’ – a reused manuscript bearing traces of older writings, and he likened his career as a ‘time of great delight’. During his long retirement period, he kept delight in remembering his achievements and sharing it with visitors.

Jules D’Hoore passed away in his home on 19/09/2017,  a few months after he celebrated his 100th anniversary with family and friends. He was a great man, a polymath whose stories will continue living on among the large community who had the chance of knowing him.

We end this in Memoriam with two quotes from Jules which we found in his Memoires (Family Archive, 2004):

“…during our long travel through West-Africa for studying laterites in the Sahel, we often slept the night on a roof terrace. Safe of the odd cycads it was dead-silent, the stars hanging high in the sky like balls on a Christmas tree in the firmament. Sleeping in, I was thinking of the immemorial Chaldese astrologists, or better the proto-theologists, who could read God’s will from the run of the stars. They stood round me in a big group and I could recognize Copernicus, Galilei and Kepler. In that that excellent company I fell asleep till the morning chill woke us up to see the first stripe of yet another sunny day… “

“During my career I was able to travel a lot by sea, by land and though the sky… I could reflect and dream away above mountain chains, tropical rain forest, steppes and deserts, icy plains of Greenland, a snow-covered Canada, great water falls … Victoria, Niagara… safe dreaming is never to be taken for granted, also not when watching mother earth from the window of an air plane…”.

By Hubert Gulinck and Seppe Deckers

The Soil Science Society of Belgium is an organization gathering all actors of the soil science community in Belgium.

Our MOOC on tropical soils is among the 10 finalists for the 2020 edX prize for exceptional contributions in online teaching and learning! And it’s free! Want to learn about soil classification or soil management in the tropics? Look no further! @KU_Leuven @ISRICorg @Arwyn_Italy https://twitter.com/edXOnline/status/1321816663013076993

I stumbled upon these really cool pictures of soil profiles that were disturbed by tree uprooting. Pretty remarkable horizon preservation.